You are here: Home / For Patients / Patient Education / Eye Diseases / Retinopathy of Prematurity

What Is Retinopathy Of Prematurity (ROP)? 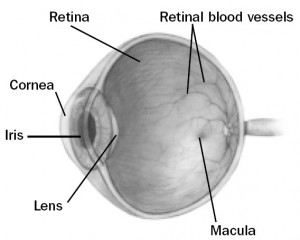 Retinopathy of prematurity (historically called Retrolental Fibroplasia) is a potentially blinding eye disorder that primarily affects premature infants weighing about 2¾ pounds (1250 grams) or less that are born before 31 weeks of gestation (A full-term pregnancy has a gestation of 38–42 weeks). The smaller a baby is at birth, the more likely that baby is to develop ROP. This disorder—which usually develops in both eyes—is one of the most common causes of visual loss in childhood and can lead to lifelong vision impairment and blindness. ROP was first diagnosed in 1942.

How many infants have ROP?

Today, with advances in neonatal care, smaller and more premature infants are being saved. These infants are at a much higher risk for ROP. The disease improves and leaves no permanent damage in milder cases of ROP. About 90 percent of all infants with ROP are in the milder category and do not need treatment. However, infants with more severe disease can develop impaired vision or even blindness.

Scientists believe that the periphery of the retina then sends out signals to other areas of the retina for nourishment. As a result, new abnormal vessels begin to grow. These new blood vessels are fragile and weak and can bleed, leading to retinal scarring. When these scars shrink, they pull on the retina, causing it to detach from the back of the eye.

Does oxygen administered to babies cause ROP?

It was thought at one time that too much oxygen caused ROP. However, many very premature babies would not survive or would be mentally impaired without oxygen. Now there are many advances in neonatal medicine which help immature lungs develop and work better, so less oxygen can be used for the premature babies. It is also thought that not enough oxygen could cause ROP. Supplemental oxygen as required has been shown to not worsen active prethreshold ROP. Oxygen should be used as directed by your neonatologist.

Studies have shown no correlation between light exposure and the development of ROP.

Are there different stages of ROP?

ROP is classified in five stages, ranging from mild (stage I) to severe (stage V):

Stage I — Mildly abnormal blood vessel growth. Many children who develop stage I improve with no treatment and eventually develop normal vision. The disease resolves on its own without further progression.

Stage II — Moderately abnormal blood vessel growth. Many children who develop stage II improve with no treatment and eventually develop normal vision. The disease resolves on its own without further progression.

Stage III — Severely abnormal blood vessel growth. The abnormal blood vessels grow toward the center of the eye instead of following their normal growth pattern along the surface of the retina. Some infants who develop stage III improve with no treatment and eventually develop normal vision. However, when infants have a certain degree of Stage III and “plus disease” develops, treatment is considered. “Plus disease” means that the blood vessels of the retina have become enlarged and twisted, indicating a worsening of the disease. Treatment at this point has a good chance of preventing retinal detachment.

Stage IV — Partially detached retina. Traction from the scar produced by bleeding, abnormal vessels pulls the retina away from the wall of the eye.

Stage V — Completely detached retina and the end stage of the disease. If the eye is left alone at this stage, the baby can have severe visual impairment and even blindness. Most babies who develop ROP have stages I or II. However, in a small number of babies, ROP worsens, sometimes very rapidly. Untreated ROP threatens to destroy vision.

We also refer to zones of involvement in the retina, as pictured in the graphic of the retina:

Zone One is centered on the Macula (which is the area of central vision needed for reading).

Zone Two refers to an area that is doughnut shaped that extends to the edge closest to the nose.

Zone Three refers to the crescent shaped area toward the ear.

If disease appears in Zone One (as can happen with extremely low birthweight infants) damage to the retina tends to be more severe. IF Zone Three is affected, the premature infant will tend to have mild involvement, leading to useful vision.

How is ROP treated?

The most effective proven treatments for ROP is laser therapy. Laser therapy “burns away” the periphery of the retina, which has no normal blood vessels. Laser treatment destroys the peripheral areas of the retina, slowing or reversing the abnormal growth of blood vessels. Unfortunately, the treatments also destroy some side vision. This is done to save the most important part of our sight—the sharp, central vision we need for “straight ahead” activities such as reading, sewing, and driving.

Laser treatment is performed only on infants with advanced ROP, particularly stage III with “plus disease.” New evidence is pointing to benefit for earlier laser treatment.

In the later stages of ROP, other treatment options include:

Scleral buckle: This involves placing a silicone band around the eye and tightening it. This keeps the vitreous gel from pulling on the scar tissue and allows the retina to flatten back down onto the wall of the eye. Infants who have had a sclera buckle need to have the band removed months or years later, since the eye continues to grow; otherwise they will become nearsighted. Sclera buckles are usually performed on infants with stage IV or V.

Vitrectomy: involves removing the vitreous and replacing it with a saline solution. After the vitreous has been removed, the scar tissue on the retina can be peeled back or cut away, allowing the retina to relax and lay back down against the eye wall. Vitrectomy is performed at stage V and in some cases in stage IV.

What happens if treatment does not work?

While ROP treatment decreases the chances for vision loss, it does not always prevent it. Not all babies respond to ROP treatment, and the disease may get worse. If treatment for ROP does not work, a retinal detachment may develop. Often, only part of the retina detaches (stage IV). When this happens, no further treatments may be needed, since a partial detachment may remain the same or go away without treatment. However, in some instances, physicians may recommend treatment to try to prevent further advancement of the retinal detachment (stage V). If the center of the retina detaches, central vision is threatened, and surgery may be recommended to try and reattach the retina. Despite best efforts in rare cases blindness may still result.

Are there other risk factors for ROP?

In addition to low birth weight and how early a baby is born, other factors contributing to the risk of ROP include anemia, blood transfusions, respiratory distress, breathing difficulties, and the overall health of the infant.

Can ROP cause other complications?

Yes. Infants with ROP are considered to be at higher risk for developing certain eye problems later in life, such as retinal detachment, myopia (nearsightedness), strabismus (crossed eyes), amblyopia (lazy eye), and glaucoma. In many cases, these eye problems can be treated or controlled.